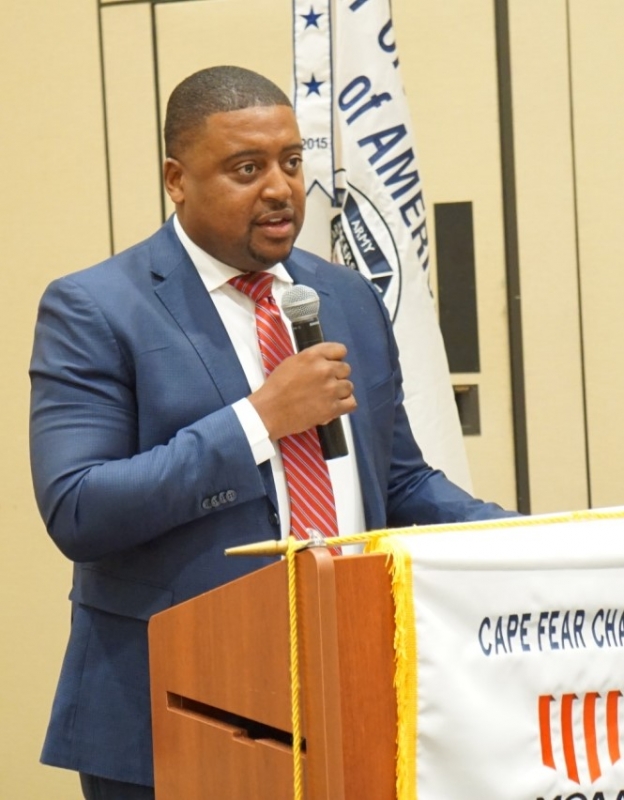 The event started with a social reception and a service of cocktails and hors d' oeuvres. A static display of chapter archival and awards paraphernalia was set up for the perusal of the membership.

After President Watkins called the meeting to order, Specialist Kylie Toerpe of the 82nd Airborne Division Band and Chorus, sang a wonderful rendition of the National Anthem, followed by President Watkins leading the assembly in the Pledge of Allegiance to the flag, and Chaplain Atkinson delivering the invocation.

President Watkins introduced the newest member of the chapter, CW2 Jasper Bigler, currently assigned to the 3rd BCT, 82nd Airborne Division, who joined just prior to the meeting.

President Watkins introduced the Honorable Mitch Colvin, Mayor of Fayetteville, who was the featured speaker for the evening. Following his presentation, the Mayor was presented an engraved chapter coin mounted on a coin lock as a small token of appreciation. Moreover, the Mayor was conferred Honorary Membership in the Cape Fear Chapter in keeping with a long-standing tradition of extending such courtesy to the serving Mayor of Fayetteville.

President Watkins reported that the chapter had an excellent year and presented a brief recap of the chapter’s major accomplishments during 2019. He added, however, that the chapter still has some vacant key staff positions on the executive board. He then ceremoniously pinned a 2018 MOAA Levels of Excellence Award 5-Star medallion on the chapter colors, marking the fifth consecutive year the chapter has been recognized as a 5-star chapter.

Pursuant to the chapter’s constitution and bylaws the general membership voted to approve the board of directors’ recommendation to keep the dues structure unchanged for 2020, i.e., $20 for regular members and $10 for surviving spouses per annum.

The 82nd Airborne Division Band’s “Jazz Combo” put on an outstanding performance of jazz selections to the enjoyment of all.

Chaplain Atkinson led the assembly in singing God Bless America and then delivered the benediction to cap a great evening.

Event program and key speaker's biography can be accessed at download bar above.