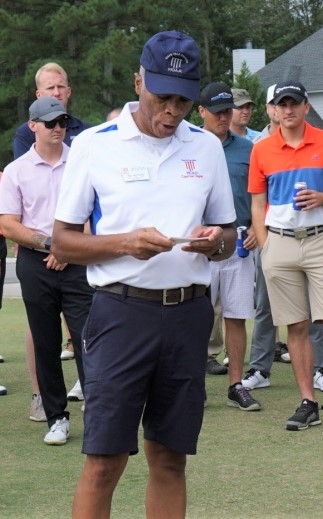 The event kicked off with the Pledge of Allegiance to the Flag, followed by the invocation by Chapter Chaplain Tim Atkinson. Co-Tournament Director Juan Chavez introduced Ira Watkins as our new Chapter President.

President Watkins welcomed all the tournament participants, especially the active duty soldiers/airmen who were treated by chapter members to play in the tournament, thanking them for their service and sacrifices. He further thanked all the tournament sponsors, singling out Anfinsen Plastics Molding & Assembly, Inc. as the major sponsor, and the Meinhardt family for their long-standing collective support and loyal participation as tournament committee volunteers.

Finally, President Watkins praised Tammy Beshlin, Co-Tournament Director and all the Tournament Committee volunteers for their hard work that made the event possible and successful.

Players teed off in excellent weather and in great spirits. Following play, a catered dinner by Logan’s Roadhouse was enjoyed by all. The event was capped off with presentation of awards and prizes. Overall, the fundraiser was a huge success.