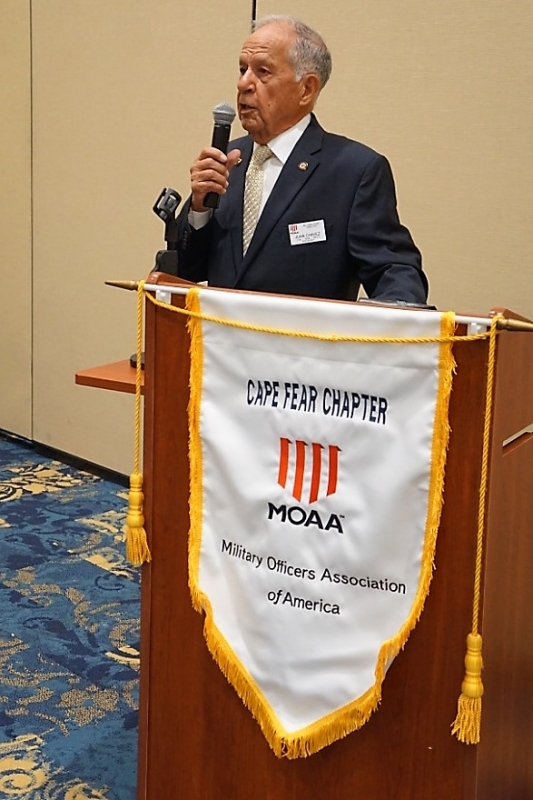 The Color Guard was provided by the Army JROTC, Douglas Byrd High School; their performance was superb.

Chaplain Tim Atkinson sang wonderful renditions of the National Anthem and God Bless America accompanied by Cindy Pyo on the keyboard. He also delivered the invocation and benediction.

President Chavez introduced and welcomed new member COL (Ret) Campbell P. Cantelou. He also fare welled Honorary Member Drew Brooks, Military Editor of the Fayetteville Observer who is taking on a new job in Washington. DC. President Chavez presented him with a CFC MOAA Certificate of Appreciation for his invaluable contributions to the chapter.

President Chavez reported that the chapter had an excellent year and presented a brief recap of the chapter’s major accomplishments during 2018. He then ceremoniously pinned a 2018 MOAA Levels of Excellence Award 5-Star medallion to the chapter colors.

Pursuant to the chapter’s constitution and bylaws the general membership voted to approve the board of directors’ recommendation to keep the dues structure unchanged for 2019, i.e., $20 for regular members and $10 for surviving spouses per annum.

Being an election year, Willie Wright, Chairman of the Nominating Committee presented the slate of candidates as follow: Ira Watkins for President; George Bond for 1st VP; Rich Underwood for 2nd VP; Marty Williams for 3rd VP; Ralph Hinrichs for Treasurer; and, Sara Ballard for Secretary. Ballots were passed out to those present and early voting commenced.

The 82nd Airborne Division “All American Chorus” put on another memorable performance.

President Chavez introduced the NC Representative William “Billy” O. Richardson of District 44 who was the featured speaker for the evening.

Barbara Richardson, wife of Billy won the 50/50 raffle and donated her half of the proceeds amounting to $77 to the scholarship fund.

Chapter archival paraphernalia and chapter awards were on display for the general membership.