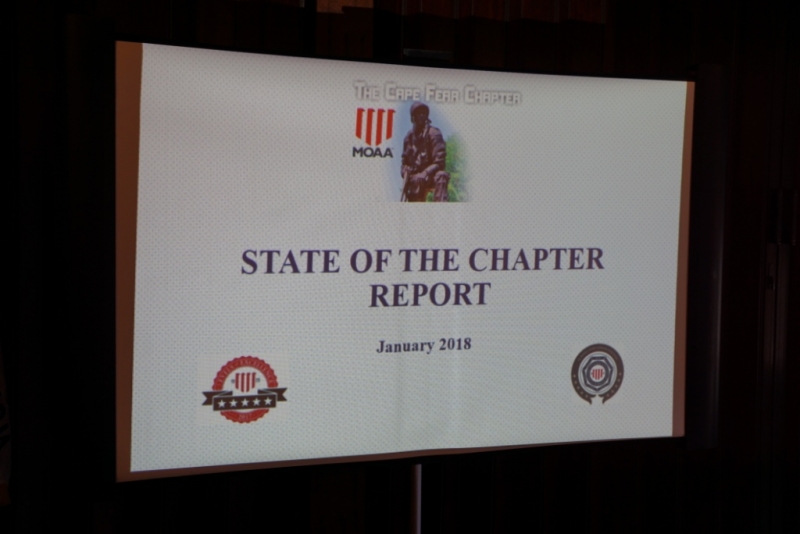 The first general membership meeting of 2018 was held at McKellar’s Lodge, Fort Bragg, one of our favorite gathering places.

Lisa Chandler sang a beautiful rendition of our National Anthem, President Chavez led the Pledge of Allegiance to the flag, and Chaplain Tim Atkinson gave the invocation.

The National Sojourners staged the patriotic sketch “Building the Flag”, concluding with the “Toast to the Flag” by their local chapter president, LTC Wical. The performance was very well delivered and received.

Cadet Harris presented a report of his experiences while attending the Spirit of America Leadership Conference at Freedoms Foundation, Valley Forge in July of 2017. Our chapter sponsored his attendance at the conference. Cadet Harris was presented a chapter coin by President Chavez as a token of appreciation for his outstanding presentation.

President Chavez presented a donation of $600 to the National Sojourners to help fund the attendance of another worthy high school JROTC cadet at this year’s Spirit of America Youth Leadership Conference continuing our long-standing support of this noble program. LTC Wical, President, NC Chapter 97, National Sojourners accepted the donation.

Finally, President Chavez presented the annual “State of the Chapter” report, summarizing the events and accomplishments of 2017, and outlining the chapter's goals for 2018.

Tom Donnelly was the lucky winner of the 50/50 drawing, pocketing $77. Chaplain Atkinson deliver the benediction and the meeting adjourned.