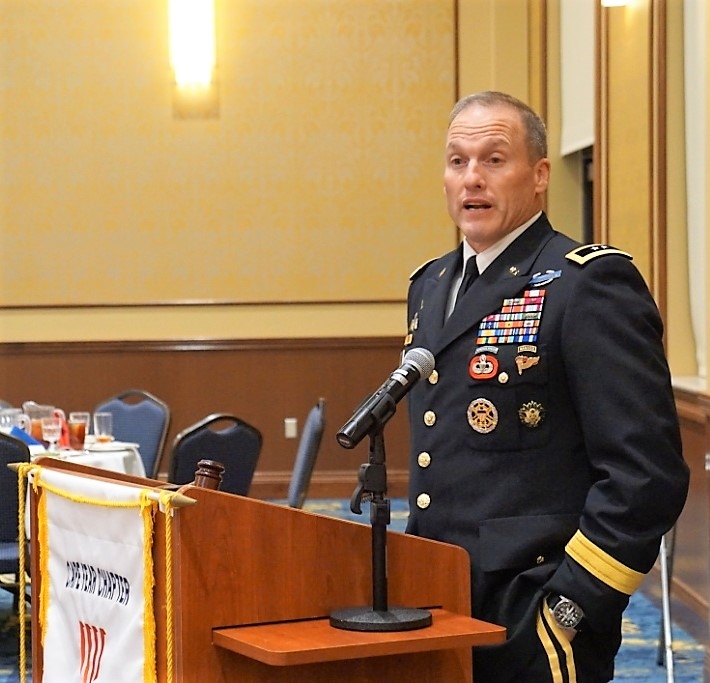 The Color Guard was provided by the Army JROTC, Westover High School; their performance was flawless.

Chaplain Tim Atkinson sang wonderful renditions of the National Anthem and God Bless America accompanied by Helene Smith on the keyboard. He also delivered the invocation and benediction.

President Chavez introduced new members: Mark Emmer, and Allen Carter & wife Deborah. He also recognized the president of the NCCOC and all council officers, and all chapter presidents of NC chapters and their spouses. The CFC was the host chapter for the NCCOC quarterly meeting held at Fort Bragg on the 18th of November, so the entire NCCOC contingent joined us for dinner.

Pursuant to the chapter’s constitution and bylaws the general membership voted to approve the board of directors’ recommendation to keep the dues structure unchanged for 2018, i.e., $20 for regular members and $10 for surviving spouses per annum.

The 82nd Airborne Division “All American Chorus” performed to the delight of all; they were superb.

Art Macaltao was the winner of the 50/50 raffle; his half of the proceeds amounting to $116.

For the first time ever, there was a static display of all chapter archival paraphernalia and chapter awards. President Chavez declared the beginning of a new tradition, i.e., to display these items once a year at the annual membership meeting for the general membership to peruse and enjoy.