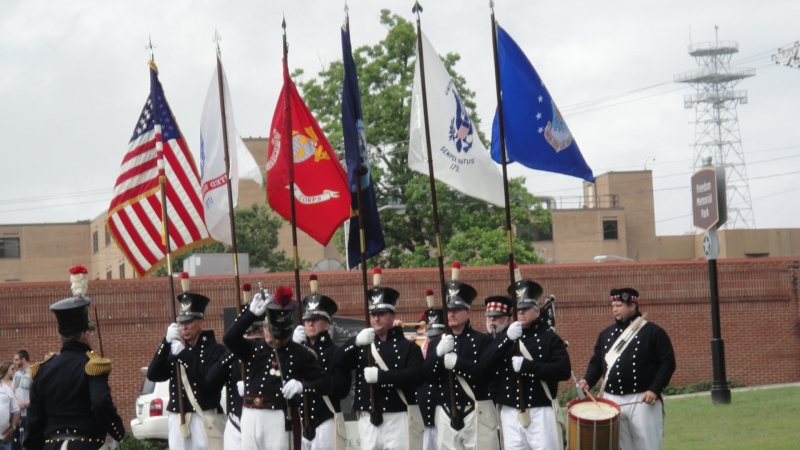 Our chapter was a presenter at the annual ceremony held at Freedom Memorial Park in downtown Fayetteville on Memorial Day. President Chavez presented a memorial wreath to honor our fallen comrades; he was assisted by Carol Ivey representing our surviving spouses.

The wreath was placed at the spot where the future Global War on Terrorism (GWOT) monument will be erected. A memorial to honor our brave military men and women who have died and sacrificed so much in fighting terrorism since 9/11; it’s a well-deserved and way overdue tribute to our latest generation of warriors.

The privilege of presenting the GWOT memorial wreath was accorded to our chapter by virtue of our donations toward the estimated $25,000 cost for the monument. President Chavez presented a second check of $19,300 to Don Talbot, Chairman of the Freedom Memorial Park Steering Committee during the ceremony, bring the total donated to date by our chapter to $21,800. (Note: A final donation of $3,203 was made on 5 July 2016, thus fulfilling the pledge of $25,000.)

All monies raised have been from personal donations from our chapter members. Our appreciation goes to all donors for being a part of this notable undertaking. Their patriotism, respect for our fallen heroes, sense of community pride, and generosity will be acknowledged and displayed in perpetuity.