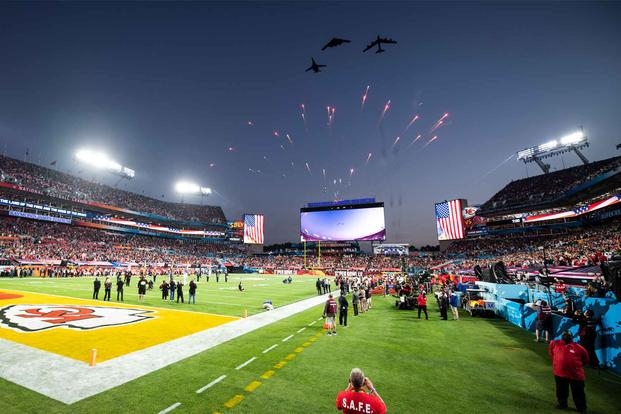 It was an inspiring moment when music stars Eric Church and Jazmine Sullivan concluded their "The Star-Spangled Banner" duet to fireworks and a history-making flyover: a trifecta of the B-2 Spirit, B-1B Lancer and the B-52H Stratofortress in formation. Their designations added up to 55 in honor of the 55th Super Bowl.

The formation of bombers was a first for such an event and was led by Capt. Sarah Kociuba, one of only 10 female B-2 pilots.

This demonstration of America's precision in defense was awe-inspiring, but you would not know it from commentary and lack of acknowledgment on air.

[RELATED AT MILITARY.COM: How the Air Force Pulled Off the First-Ever Super Bowl Flyover with All 3 Bombers ]

CBS and the NFL failed to give the occasion its due. If you blinked, you might have missed it. What also was missed was the opportunity to spotlight the planning and training to make such moments special to the American public and to international communities enjoying the big game. There is also the significant recruiting opportunity to support the all-volunteer force.

The military-civilian divide is only getting greater, and CBS helped widen the gap by missing the moment. This follows a fall game where Fox commentators Joe Buck and Troy Aikman lamented about flyovers' "cost of taxpayer dollars." These comments, which appeared in leaked audio, were shrugged off as sarcasm.

The Super Bowl's historic flyover could have been an opportunity to set the record straight. No shortage of information was advanced from the Air Force and reports from local stations and networks.

While the Air Force does perform nearly 1,000 flyovers per year, they double as crucial training for all the airmen and other services.

As a former commander of forces and a past aerial demonstration team member of the Air Force Thunderbirds, I can attest that the demonstration flights are rigorous and demanding. While keeping skills razor sharp, they also engage the public and inspire others to serve.

If the networks and the NFL are going to treat these flyovers as just another routine form of pre-game entertainment, there's a significant lost opportunity in providing a catalyst for one of our nation's sons or daughters to consider serving -- just like Kociuba, who as a young girl, was awestruck at the sight of a B-2 bomber at the Rose Bowl Parade.

Finally, such coverage fails to recognize and thank all those serving in our military for defending our country.

After the Super Bowl, I felt a bittersweet mix of pride in our country and sadness about misperceptions about the role of the military. Our men and women who serve in the uniformed services, our veterans, their families and survivors certainly deserve better.