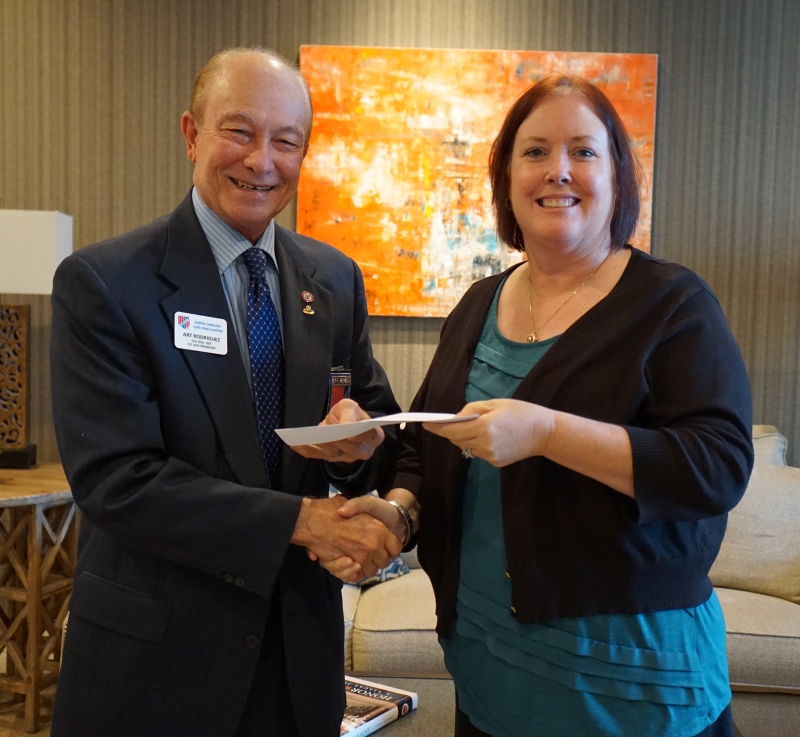 The Cape Fear Chapter made its annual donation to the Fort Bragg Fisher House at their new home. Art Rodriguez, Chapter 1st Vice President presents the $500 check to Ms. Lorie Southerland, Director of the House.

Donation to the American Red Cross 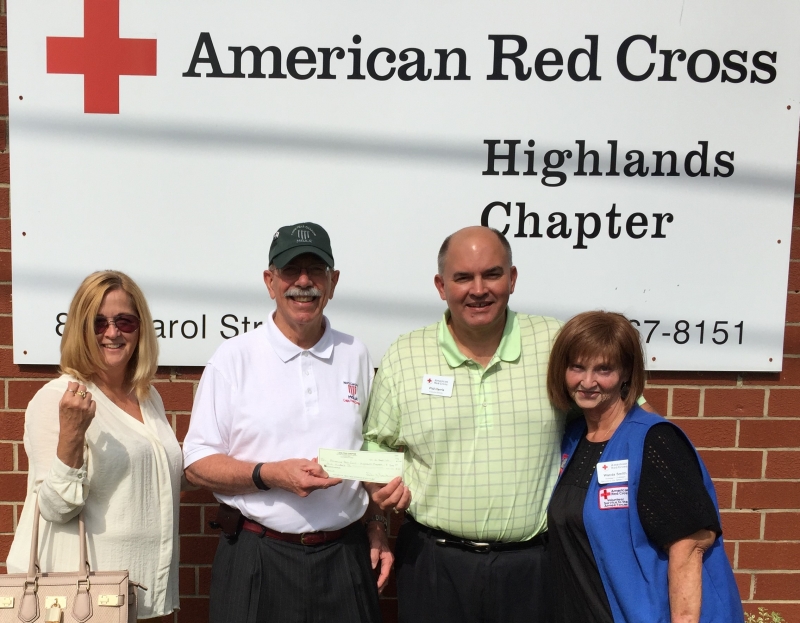 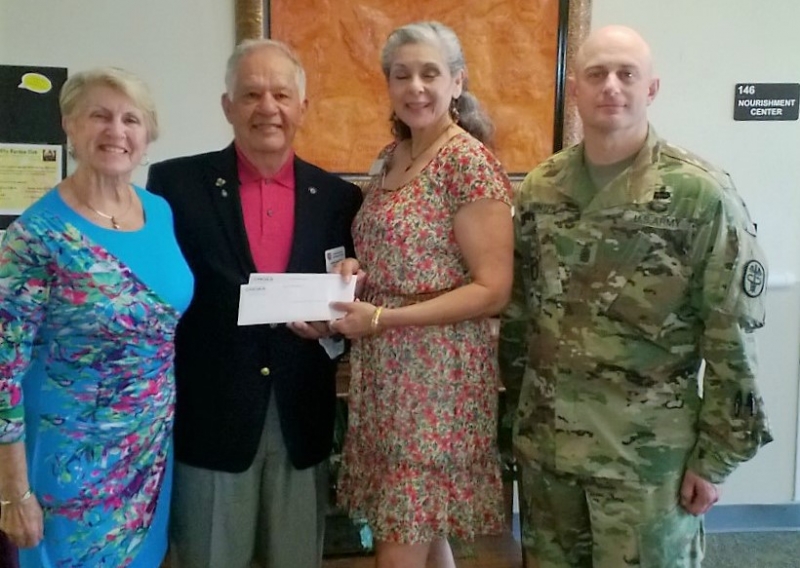 The gift cards are given to wounded warriors and their families as needed while assigned to the Warrior Transition Battalion at Fort Bragg undergoing medical treatment, evaluation, and/or rehabilitation. 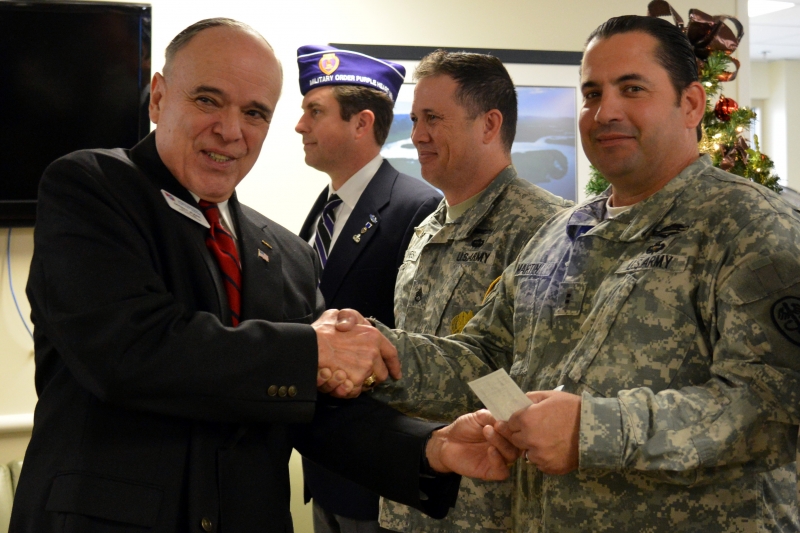 The Cape Fear Chapter donated $1,200 to the Fort Bragg Chapter of the Military Order of the Purple Heart to sponsor two wounded warriors home for Christmas.

Both CWO Martin originally from South Carolina, and Sergeant Davies from North Carolina were wounded while involved in combat operations in Afghanistan.

Both Purple Heart recipients have over 20 years of military service and will soon be retired from active duty as a result of their wounds. 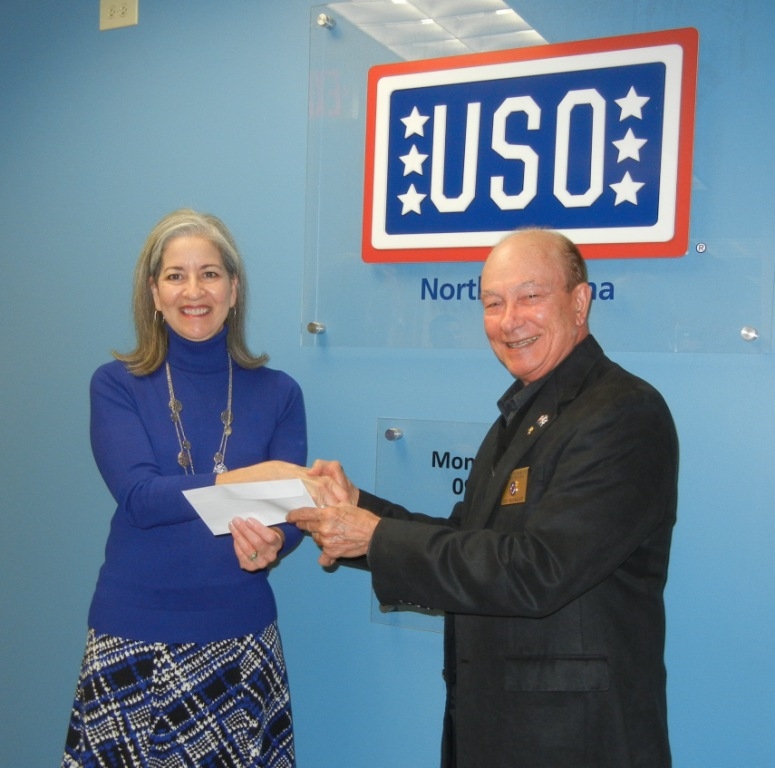 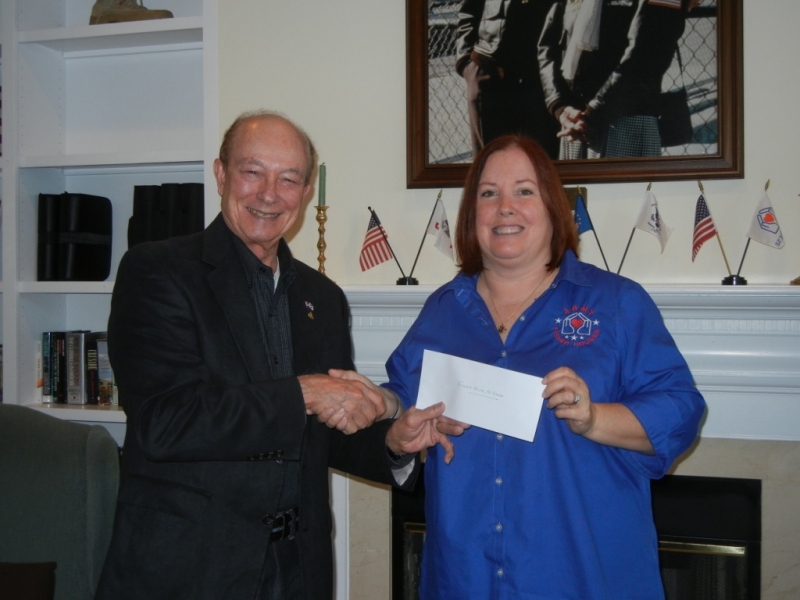 Art Rodriguez, 1st Vice President of the Cape Fear Chapter presents a donation to the Fort Bragg Fisher House on behalf of the Chapter. Accepting the $500 check is Ms. Lorie Southerland, Director of the House.

Donation to the American Red Cross 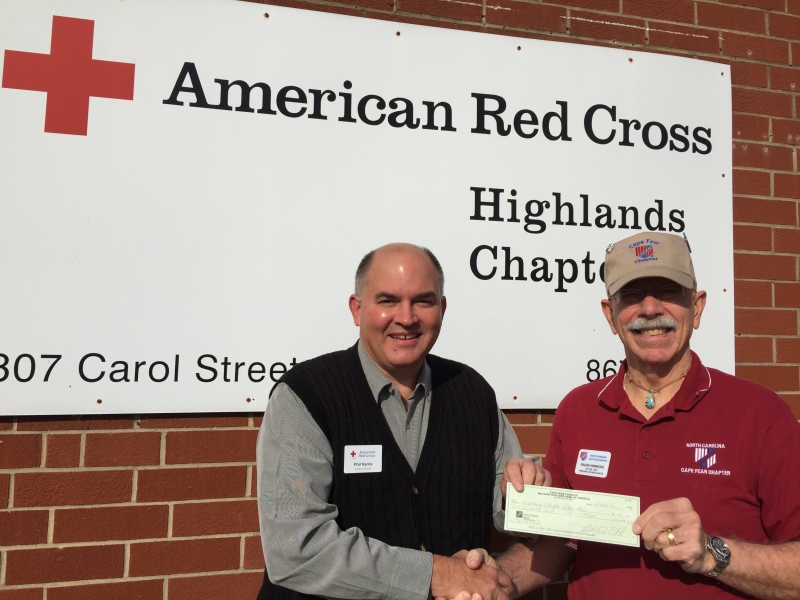 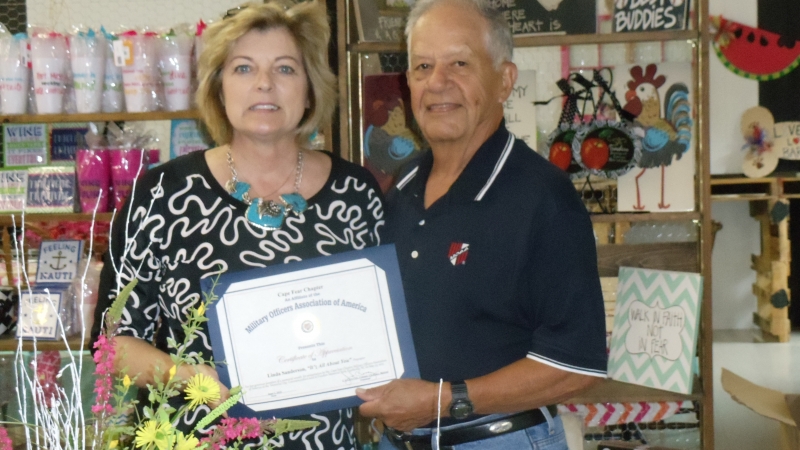 The beautiful memorial wreath presented by the Cape Fear Chapter at the Memorial Day Ceremony at the Freedom Memorial Park, Fayetteville on 25 May 2015 was made and donated by Linda Sanderson, proprietor of It'z All About You, a gift store located in Eastover.

Mrs. Sanderson refused to accept any payment for the wreath, stating that it was her contribution to honor those who gave their all for the freedoms she and all of us enjoy. To recognize her generosity, President Chavez presented Mrs. Sanderson with a certificate of appreciation.

This is not the first time that Mrs. Sanderson has expressed her patriotism, she has been a loyal sponsor of our annual ROTC Scholarship Fund fundraising golf tournament for several years.

The ceremony was hosted by Colonel Manley James, the 139th Regimental Commander. The graduation address was delivered by Brigadier General John A. Byrd, the North Carolina Assistant Adjutant General. The graduation was well attended by the family and friends of the newly commissioned officers.

Cape Fear Chapter 3rd Vice President, Bill Dadek, met with the 12 candidates at the Academy the day prior to the graduation, and presented each of them with a set of gold bars, a Velcro 2LT insignia, a pocket copy of the US Constitution, and a free one year membership in MOAA. 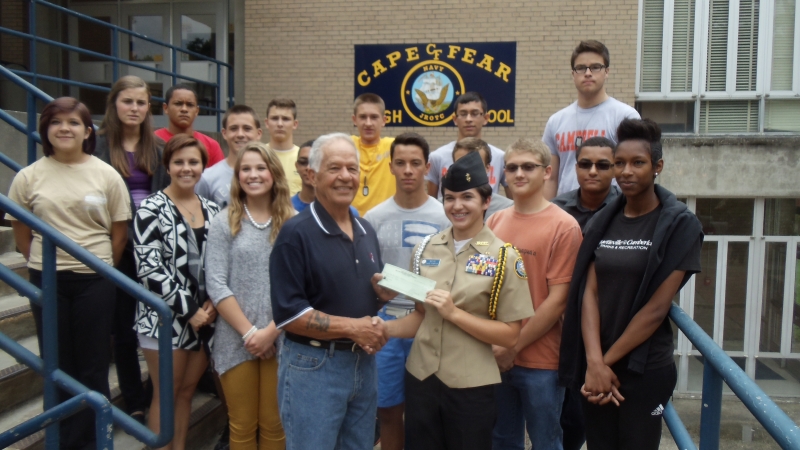 President Chavez presents a $1,000 grant to the Navy JROTC unit at Cape Fear High School to partially fund their transportation expenses to their summer training camp at Marine Corps Air Station/Camp Lejeune, NC from 1 to 8 August 2015.

Cadet Haylee Neal, this year's recipient of the MOAA Medal, and the unit's new cadet commanding officer accepted the grant. Several of the cadets witnessed the presentation on the campus of Cape Fear High School.

$500 to West Bladen High School Army JROTC in Bladenboro, NC to purchase signs for their physical fitness trail constructed by the unit’s cadets on the school campus.

Letters of acknowledgement and thanks are at download below. 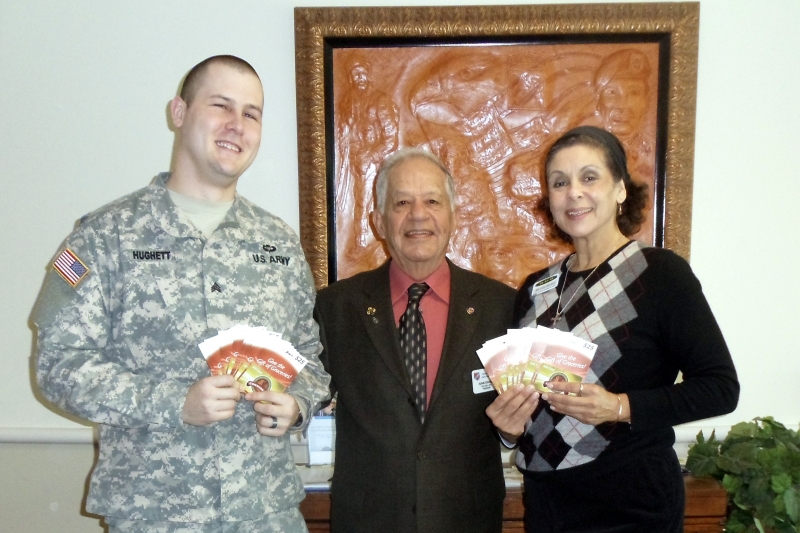 President Chavez presents Ms. Martha Brown, Director, Army Soldier and Family Assistance Center $500 in $25 grocery gift cards redeemable at the post commissaries as a donation from the Cape Fear Chapter. The gift cards are given to wounded warriors and their families as needed while assigned to the Wounded Warrior Transition Battalion at Fort Bragg undergoing medical treatment, evaluation, and/or rehabilitation. Assisting Ms. Brown in accepting the gift cards is Sergeant Hughett representing the wounded warriors and their families who may be assisted through this program.

A Work in Progress

The City of Fayetteville and its Freedom Memorial Park Steering Committee are still soliciting donations in support of the public park in honor of the men and women of the U.S. military. The $1.5 million project is being funded through private donations.

There are other ways of making donations, please visit the park's website at www.freedommemorialpark.com 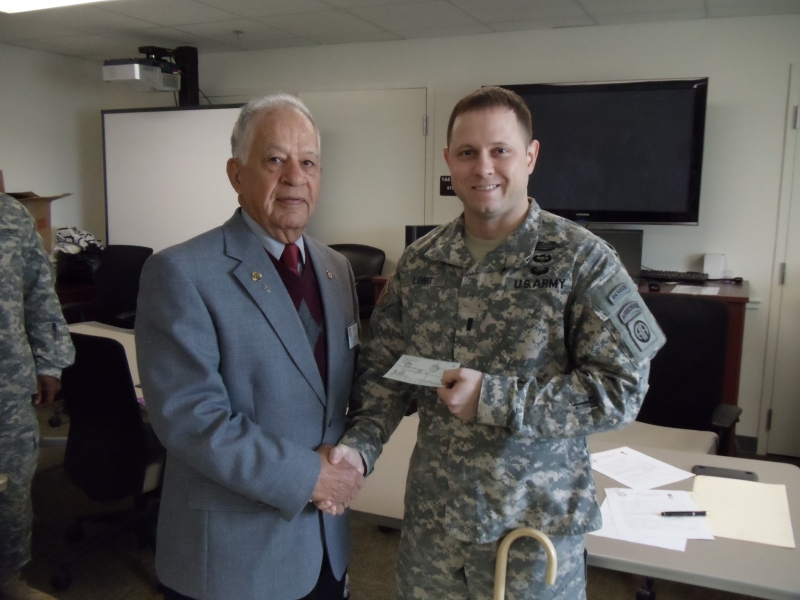 The CFC sponsored two wounded warriors from the Wounded Transition Battalion at Fort Bragg as part of the Military Order of the Purple Heart (MOPH) “Home for Christmas Project.”

President Juan Chavez presented a $1,200 check on behalf of the CFC to LTC (Ret) Art Macaltao, the Commander of the Fort Bragg Chapter of the MOPH who in turn, asked President Chavez to present the individual $600 checks directly to two wounded warriors.

In the top photo, President Chavez presents a $600 check to 1LT Mathew Long of Garrettsville, Ohio. Lieutenant Long was wounded on May 21, 2014 in southern Afghanistan while assigned to the 1st Brigade, 82nd Airborne Division.

In the bottom photo, President Chavez presents a $600 check to SFC Darron Adams of Fayetteville, NC who is recovering from wounds incurred on October 14, 2007 in Afghanistan while assigned to the 508th STB, 82nd Airborne Division. SGC Adams was hit by an RPG and suffered massive wounds on his right leg. 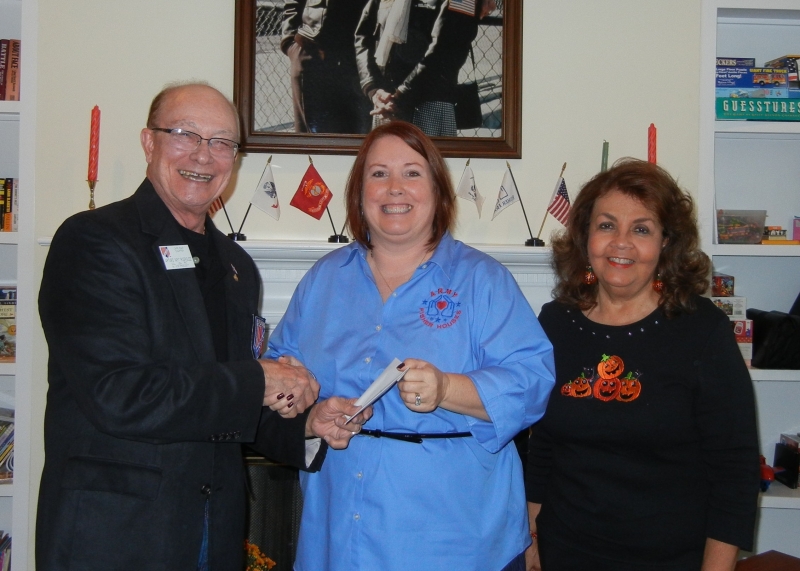 1st Vice President and Mrs. Art Rodriguez present a $500 check to Ms. Lorie Southerland, Director of the Fort Bragg Fisher House as a donation from the Cape Fear Chapter, MOAA. 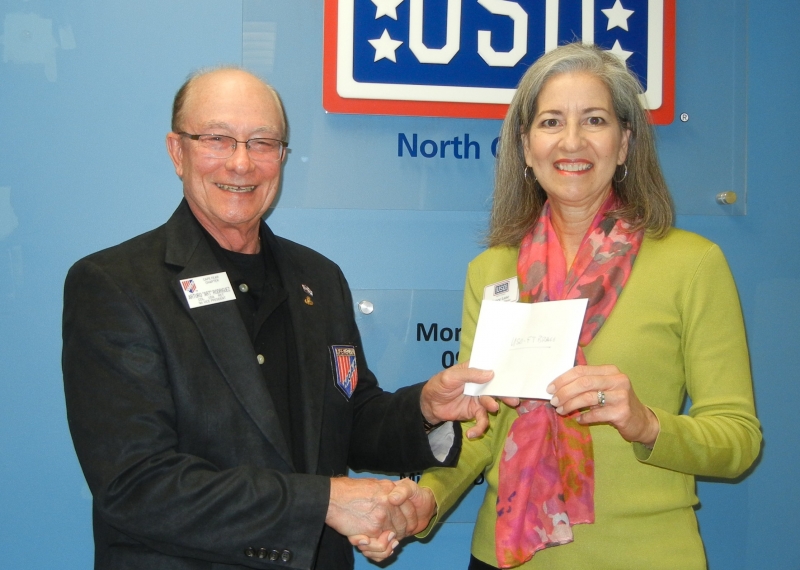 1st Vice President Art Rodriguez presents a $500 check to Ms. Renee Lane the Director of the Fort Bragg USO as a donation from the Cape Fear Chapter, MOAA in support of the USO’s work on behalf of our service members and their families stationed at or transiting Fort Bragg. 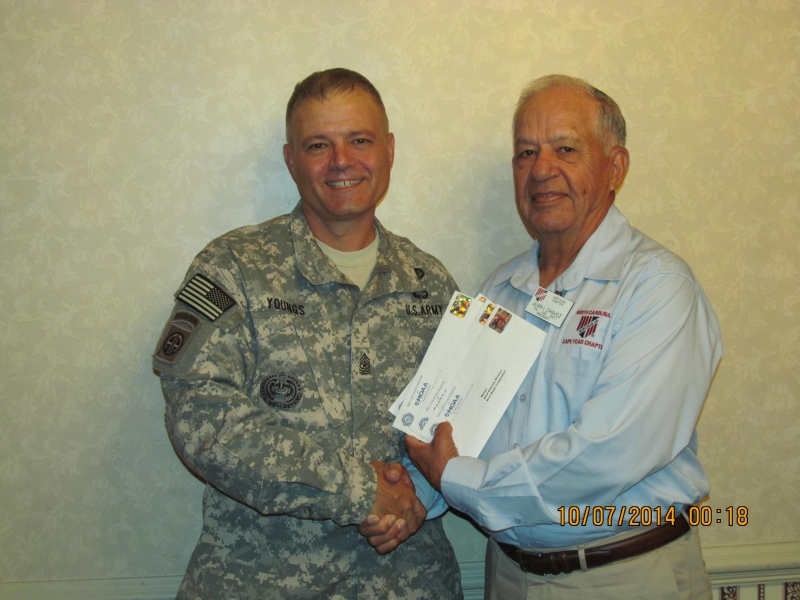 Chapter President Chavez presents SGM Carl R. Youngs, Chief Medical NCO, 82d Airborne Division Surgeon Section with four $50 dinner gift cards donated by the Cape Fear Chapter for award to the top two teams in the All American Top Medic Competition held on 8 October 2014. The top 2-medic teams in this grueling competition will advance to the All Army Best Medic Competition to be held at Camp Bullis, Texas on 5-7 November 2014.